A career spanning more than 45 years in adventurous flying missions around the world. 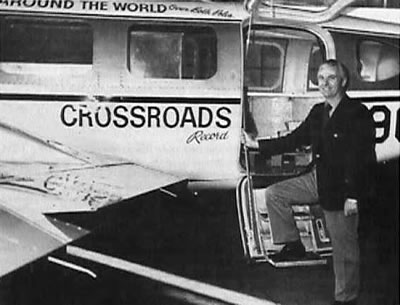 Elgen Long began his aviation career when he joined the U.S. Navy in 1942 as an Apprentice Seaman. Between then and the time of his honorable discharge in 1946 as a First Class Petty Officer, he had completed training and served in combat during WW II as an aviation radio operator, radar operator, aerial gunner, radar bombardier, anti-sub warfare operator, and aerial navigator.

Most of Elgen's navy flying was done in two-engine PBY, and four-engine PB2Y seaplanes. After discharge from the navy, Elgen was the last known navigator to have taken a check-ride in the queen of the seaplane era, a Boeing 314 "Yankee Clipper". These were the last days of the flying boat "Clippers" and of navigating by wet compass, drift meter, sun and stars. The age of electronic navigation had arrived.

In civilian life he received an Associate Degree in Aeronautics from the College of San Mateo. Designated by the Airline Pilots Association as an aircraft accident investigator, Elgen received training as an accident investigator at the University of Southern California and the Norton Air Force Base Crash Laboratory. He was also certified by the Federal Aviation Administration as an Air Safety Counselor, aviation radioman, flight navigator, aircraft power plant mechanic, single and multi-engine commercial pilot with instrument rating, and an airline transport pilot with type ratings in C-46, L-1049-H, CL- 44, DC-8, and B-747 aircraft. The British Board of Trade issued Elgen an Airline Transport Pilots License and he was senior training Captain for Trans Meridian London Airline. Elgen also flew flight tests for the British Board of Trade during the English certification process of the Canadair CL-44.

Flying with the Flying Tigers

In January 1947 Elgen joined a recently started airline, the Flying Tiger Line, from which he retired after 41 years in August 1987 at age 60. He started as a radio operator then advanced to navigator, pilot, captain, check pilot, examiner, and finally retired as senior Boeing 747 captain on the captain's revue board.

The 35 years of research by Marie and Elgen Long on the disappearance of Amelia Earhart was a monumental milestone in the annals of individuals doing an aircraft accident investigation. Elgen is still active as a member of the "International Society of Air Safety Investigators" and "National Aeronautics Association".

Over the last sixty years, he has amassed nearly 45,000 hours of flight without incurring an accident or violation. Only a handful of old aviators can match that achievement.

Elgen's aviation career, flights took him to many unexplored areas of the world. During the early days of constructing the "Distant Early Warning Line" in the arctic, flights were required that used maps having large areas marked unexplored. Often flights were conducted near the magnetic north pole where the magnetic compass became useless. The Curtis C-46 aircraft they flew didn't have a gyroscopic polar compass, and in the cloudy and dark long winter nights there was often no stars to guide them.

Theirs was the first airplane to land at "site 24". There were no radio or weather reports to warn that fog in the area was restricting the visibility to less than a mile. As luck would have it, they spotted the dozen or so empty oil drums the tractor driver had laid out to mark the area of the ice he had smoothed out on Shepard's Bay, and they were able to deliver their valuable cargo. Shutting off the airplane's engines, they unloaded as fast as they could, hoping the engines would not get so cold they wouldn't start again. The flight back to base had to be flown over hundreds of miles of unexplored territory without even a compass to guide them.

This was just one of many flights that were made to future radar sites that had no known geographical coordinates or definitive position. It was a tough learning experience given in a very cold environment. Unfortunately, planes and lives were lost in the process.

Marie and Elgen were the first Americans to board the Queen Elizabeth II on its premiere voyage out of South Hampton. The passage as VIP guests on the QE II's maiden voyage to Lisbon, Portugal and Tenerife in the Canary Islands was a trip to remember.

Visiting Moscow, Samarkand, Irkutsk, Lake Baykal, and traveling on the trans-Siberian railroad must have been fascinating to the Longs. They watched the workers closely as they changed the wheel trucks under the railcars at the border to fit the different gauge tracks. They tasted Yak milk in the relative comfort of their train as they traveled steadily across the blizzard swept plains of Mongolia towards Beijing, China.

Riding a camel at the great-wall of china, strolling through the Forbidden City, or eating Peking duck in the restaurant where it was originated, surely made priceless memories of those savored mini-adventures. The visit to Beijing was topped-off by an invitation to be guests of the People's Republic of China at a banquet served in the Great Hall of the People. How could they ever forget traveling on the Yangtze River, sailing their new Choey Lee sailboat in the Harbor at Hong Kong, gaming at Macau, or watching the sunset from the roof garden of the President Hotel in Kowloon.

Sailing adventures covered the Pacific Coast of Mexico and the United States from tropical Puerto Vallarta to the rugged coast of Oregon. Navigation when sailing reverted back to the wet compass, radio direction-finder, and celestial observations. The early years as an aerial navigator in seaplanes served Elgen well while sailing on the sea.

Unique spots of the earth's geography have always fascinated the Longs. Be it Point Barrow, Cape Horn, Sugar Loaf, Machu Picchu, or the Panama Canal they have traveled to witness in person those singular locations. Elgen insisted on waiting till low tide to walk out on the rocks of Cape Agulhas so he was sure to be standing as far south as possible on the southern tip of Africa. What a continent for adventure. The Straight of Gibralter, Atlas Mountains, Sahara Desert, Timbuktu, Khartoum, Addis Ababa, Lake Victoria, the Zambezi River, Victoria Falls, Cape Town, and the Cape of Good Hope, Africa offered one spectacular feature after another for the Longs to marvel at.

Their travels took a turn in 1972 to locating and interviewing the surviving participants of Amelia Earhart's around-the-world and last flight. Over one hundred individuals who were aviation's movers and shakers of the twentieth century were interviewed during the 1970s and 80s. They made trips to dozens of venues in Africa, Australia, New Guinea, North and South America, Europe, and Asia to find and interview these individuals for their personal stories. It was more than worth it. Many of them became good friends that the Longs cherished for the rest of their lives. Much of research has become a part of their book Amelia Earhart: The Mystery Solved.